The Birthplace of Mozart in Salzburg, Austria.

Everyone has heard of Mozart, the famous musician. His early death had left many people in surprise of why such talented musician would die at such a young age. At the age of 5, he started composing songs and could play music flawlessly. He had composed over 600 works had been performing before the European royalty. He had travelled a lot to search for a better position. He chose to stay at the capital where he achieved fame but however, he had always faced financial strains. Finally he passed away at the age of 35. The cause of his death could not be known with certainty. However, it was widely believed the he had suffered from acute rheumatic fever. 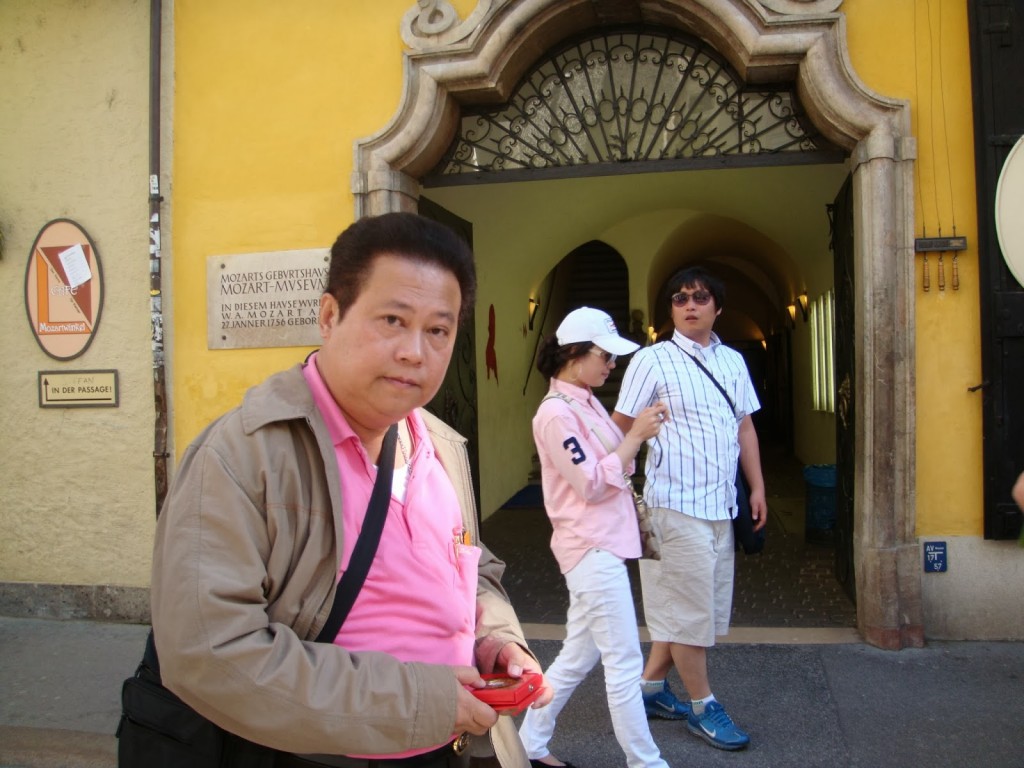 Master Tham is very devoted in his work. He had traveled around the world to do some of his own research on the Feng Shui of famous landmarks and to find out the cause behind the rise and fall of these landmarks. During his trip to Austria, he had taken this opportunity to visit Mozart’s former residence in 9 Getreidegasse, Salzburg. It is the place where the famous movie “The Sound of Music” is filmed in remembrance of Mozart.

According to him, Mozart’s house was situated in an inauspicious location. He further commented that although there are a lot of wealthy, famous and talented people in the world, without the presence of Feng Shui, not every one of them could be living in a good and happy life. Many of them are suffering in silence, unsatisfied with their life, feeling lonely and have depressions. There may be a lot of unfortunate events in their lives such as having death in their family members, facing various problems or suffering from health problems and living in a disharmony environment. Some only get famous after they’re dead.

Through Master Tham’s research, he had found out these 3 following factors:

1. The place where Mozart stayed was facing at the wrong direction.
Mozart’s house was facing a bad direction that direct negative Qi to his house. In that sector, the occupants may have talent but they will not be enjoying good wealth or health. Mozart could not achieve success and was often faced with financial distress. He was always sick too.

2. There’s a huge wall blocking the view out from the house.
Mozart’s house is situated only on a small alley. The occupants will not be enjoying good future and there will be a lot of obstacles in everything they do. Without Feng Shui in that location, no matter how hard the occupant works, they will not be able to earn money and there will always be an outflow of money. Their children will not succeed in life. In Feng Shui, this is a sign that the occupants will suffer from sickness and accidents. This is why Mozart had lots of sickness before he passed away. Master Tham had therefore advised the residents in Malaysia to make sure that you can get a view of the sky from your house.

The Entrance of Mozart’s Home

3. The staircase is very narrow.
Mozart and his family stayed in the first floor. They have to go through this very narrow ladder to their house. Narrow ladders will pull back the occupants’ success and they could not find the opportunity to shine. Due to the poor Feng Shui of the house, 5 of Mozart’s siblings died from sickness.

As a conclusion, the presence of Feng Shui in buildings are very important in playing a role for it’s occupants in order for them to achieve success and to avoid sickness and accidents.